Save the PRIMATES
Campaign

Primates are a group of animals that include lemurs, monkeys, apes as well as humans. The first ancestors appeared about 65 million years ago and survived the extinction period of the dinosaurs, like a squirrel with a shrew’s face. Ten million years later the phylogenetic tree of primates began to take shape with strepsyrrhine prosimians (lemurs from Madagascar, Indonesian lories and African bushbabies) and Asian haplorrine tarsiers. The latter group also includes monkeys which are subdivided into platyrrhines (from the New World) and catarrhines (from the Old World).[1]

Each group has evolved independently, and their physical traits have unique characteristics. Some have prehensile tails like the South American aluatta, others have large eyes to see in the dark like tarsiers, or opposable thumbs like gorillas.

The greatest threat to primates worldwide is habitat loss: the expansion of human activities for agriculture, mining and urbanization causes deforestation, desertification and pollution of natural water reserves.

Poaching and illegal trafficking also contributes to the decrease in population numbers, and the illegal captivity as pets in private facilities such as hotels and houses for entertainment has, lead many to irreversible psychological traumas. Another problem affecting primates are diseases, many of which can also be transmitted into humans (HIV, Ebola, leprosy and even Covid-19).

Climate change also represents a salient challenge for this group. The rise in temperature has disturbed many species with increased incidence of droughts preventing the growth of fruit and flowers, the main food source for primates.

Finally, the factor of invasive species, where some primate species are introduced into a different habitats different  from their own, by pet monkey collectors,  presents a big problem. Parasitism, competition for food and hybridization undermine the survival of local species that have kept the gene pool intact for millions of years.[2] 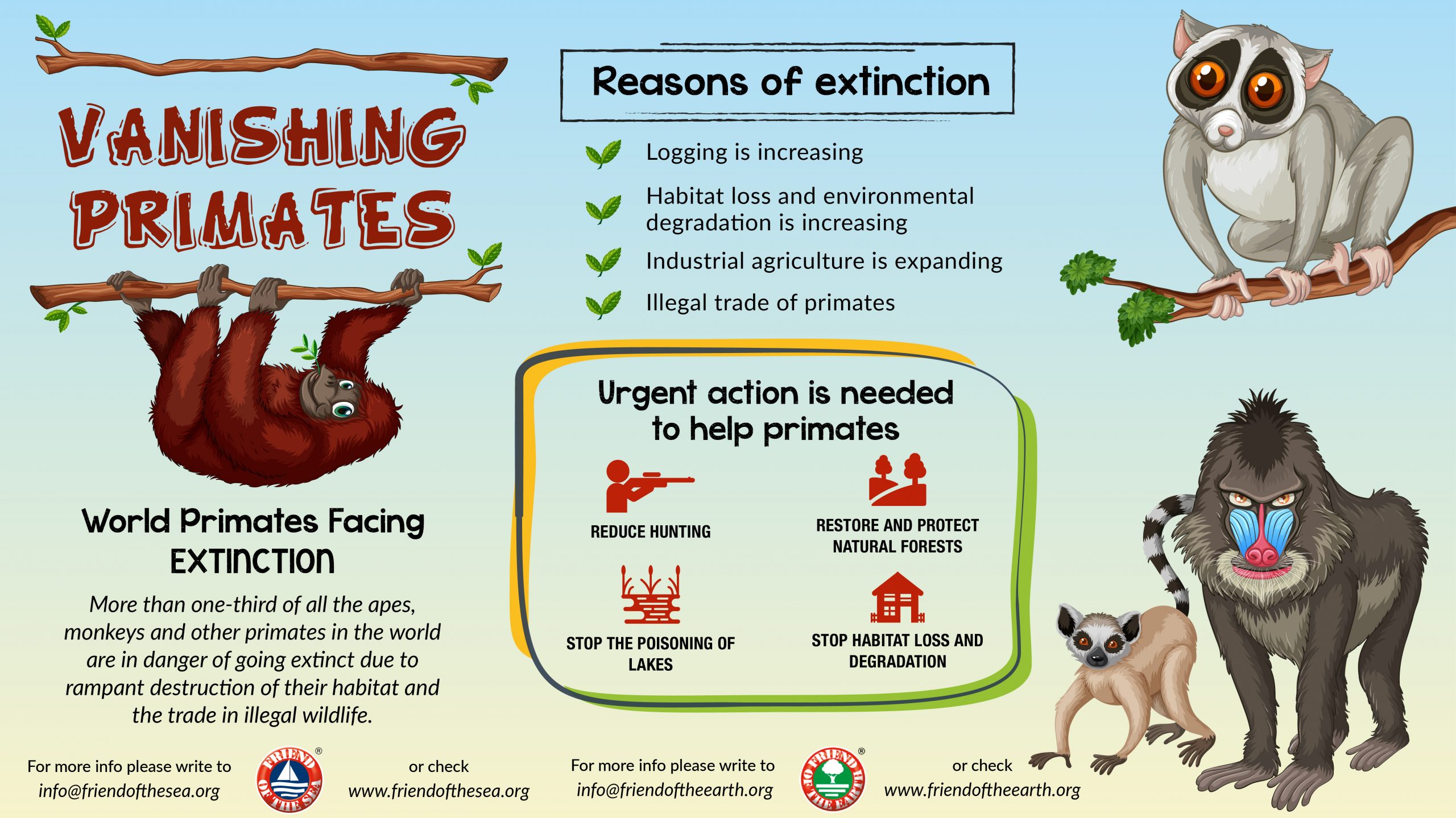 As per IUCN data, there are 521 species of primates worldwide all of which are members of terrestrial habitats. Now as many as 60% of primate species are at risk of extinction.[3]

The IUCN reported the 25 primate species close to extinction, in the latest 2018-2020 report. Among them stands out the new species of orangutan “Pongo tapanuliensis”, whose genomic differences were identified in 2017, and with only 800 individuals in the wild it is already on the verge of extinction.[4]

Although new species of primates continue to be discovered, especially in tropical forest habitats with naturally dense biodiversity many species have already dwindled to small concerning numbers owing to human activities such as deforestation, mineral extraction, and dams.

The critically endangered, endangered, and vulnerable primates can be protected by taking several actions.

Firstly, site/area protection and management, resource and habitat protection, habitat and natural process restoration would ensure their continued breeding and propagation through reforestation and afforestation processes.

Besides, sustainable agricultural, forestry and industrialization activities need to be limited by introducing appropriate laws and regulations as part of species management.

In addition, developing national conservation parks and rescue centers would be essential in areas of concern for species recovery. For example, the Kibale National Park, Uganda is a protected area in Sub-Saharan Africa which is home to 13 primate species including the rare mountain gorilla and the chimpanzee.[5]

Likewise, species re-introduction should be carried out by establishing in-situ conservation facilities such as rehabilitation centers.

Furthermore, 183 countries around the world have signed the Convention on International Trade in Endangered Species (CITES) which is aimed at prevention of illegal wildlife trade such as small monkeys to ensure strict conservation of threatened species.[6] There are currently 60 species of primates included in the CITES list, including Coiba Island Howler

Finally, crucial awareness revolving the threatened status if primates should be spread through formal education, training, and campaigns in social/print/visual media.

WSO Friend of the Earth project is acting to save endangered primates in the following ways:

Our project and collaborations

The WSO’s “Save the primates” project aims to raise awareness of the status of primates, which is one of the most endangered animal groups in the world.

Starting from January 2022 we have collaborated with the University of Turin and the U Onlus Association[8] of the research group of Prof. Cristina Giacoma in their Maromizaha Conservation project. The studies on the forest and on the indri, the largest existing lemur, have been ongoing for 15 years in the Multipurpose Center of the Maromizaha Reserve in Madagascar.

The project is taking place in the Maromizaha protected area, recently listed as protected in 2015 thanks to the joint efforts of the Malagasy authorities, the GERP (Groupe d’Etude et de Recherche sur les Primates), and the Department of Life Sciences of the University of Turin.

The project is orchestrated from a Multipurpose Center in the heart of the primary forest, providing environmental and scientific training to local guides specializing in ecotourism and ecology since 2004.

Friend of the Earth has funded the program for a year now, facilitating the continued development of the collective efforts and promising results that have been achieved in the last 15 years.

The objective of the program is to monitor the 12 indri families (Indri indri), with the intention of extending the number to 14 families by utilizing a novel sound analysis technique that uses audiomoth recorders to conduct PAM (Passive Acoustic Monitoring). The method allows researchers to measure and determine the vocalizations of the indri, with the proceeding in-depth analysis identifying the age of an individual, the kinship in the group, the sex, and having the ability to recognize single specimens.

The population of the indri species throughout Madagascar is currently at concerning levels, estimated to be between 1000-5000 individuals of which around 200 are in the Maromizaha forest, prompting the IUCN (International Union for Conservation of Nature) to classify the species as critically endangered. The information gathered by this program will allow researchers to gauge a deeper understanding of the indri species and their significant, interconnected role within the local ecosystem with the intended goal to safeguard their conservation.

The project incorporates a participatory approach, involving the local community living in the surrounding areas. Numerous environmental classes led by Maromizaha guides are being provided to raise awareness of the intrinsic value of their pristine surroundings, intended to motivate greater care for the forest. The project has also dedicated funding to providing scholarships to children from disadvantaged families to give them a chance at an education they may have otherwise not had. Women are also encouraged to participate in the program, with numerous groups engaged in reversing anthropogenic environmental damage through forest restoration and afforestation, as well as helping with the maintenance of indigenous plant nurseries.

The project has taken a multifaceted approach toward the protection of the indri families and the wider ecosystem, by incorporating novel scientific techniques whilst ensuring local communities are involved along every step to respect and protect indigenous heritage.

Thanks for the support and donation to: