Save the Pangolins
Campaign

The only mammals on earth to be covered with scales, pangolins are renowned for their unique anatomy. Unfortunately, pangolin meat is also considered to be a delicacy in China and Vietnam and their scales are widely traded for use in traditional Asian medicine – where they are believed to yield medicinal properties that can cure a variety of ailments.

This monetary incentive has led to innumerable pangolins being taken from the wild, even though it is illegal to poach them, and sold on the black market. The IUCN SSC Specialist Pangolin Group estimates that, despite the reduction in numbers over the past decades, a pangolin is illegally taken from the wild every five minutes.

It is thought that international legislation is not sufficient to protect pangolins because the laws have not been enforced. This is, in part, due to a lack of political will and a lack of funds. Local populations are also not aware or engaged in the drive to conserve these unique animals.

Though poaching is the main threat to these species, habitat loss is also negatively impacting populations in both Asia and Africa, mainly because of deforestation.

The pangolin is believed to be the world’s most trafficked mammal. There are eight species of pangolin – four from Africa and four from Asia – all of which are listed by the IUCN as threatened with extinction.

Of the eight species of pangolin:

Pangolins have a highly specialized diet, relying on ants and termites for their nutrition. Though they are not closely related to anteaters, pangolins occupy a similar ecological niche to these animals. They are important for controlling insect populations; it has been reported that a single pangolin can eat upwards of 70 million insects a year. As such, pangolins have an important role in the control of forest termites and without them, the balance of their delicate ecosystems will tip. 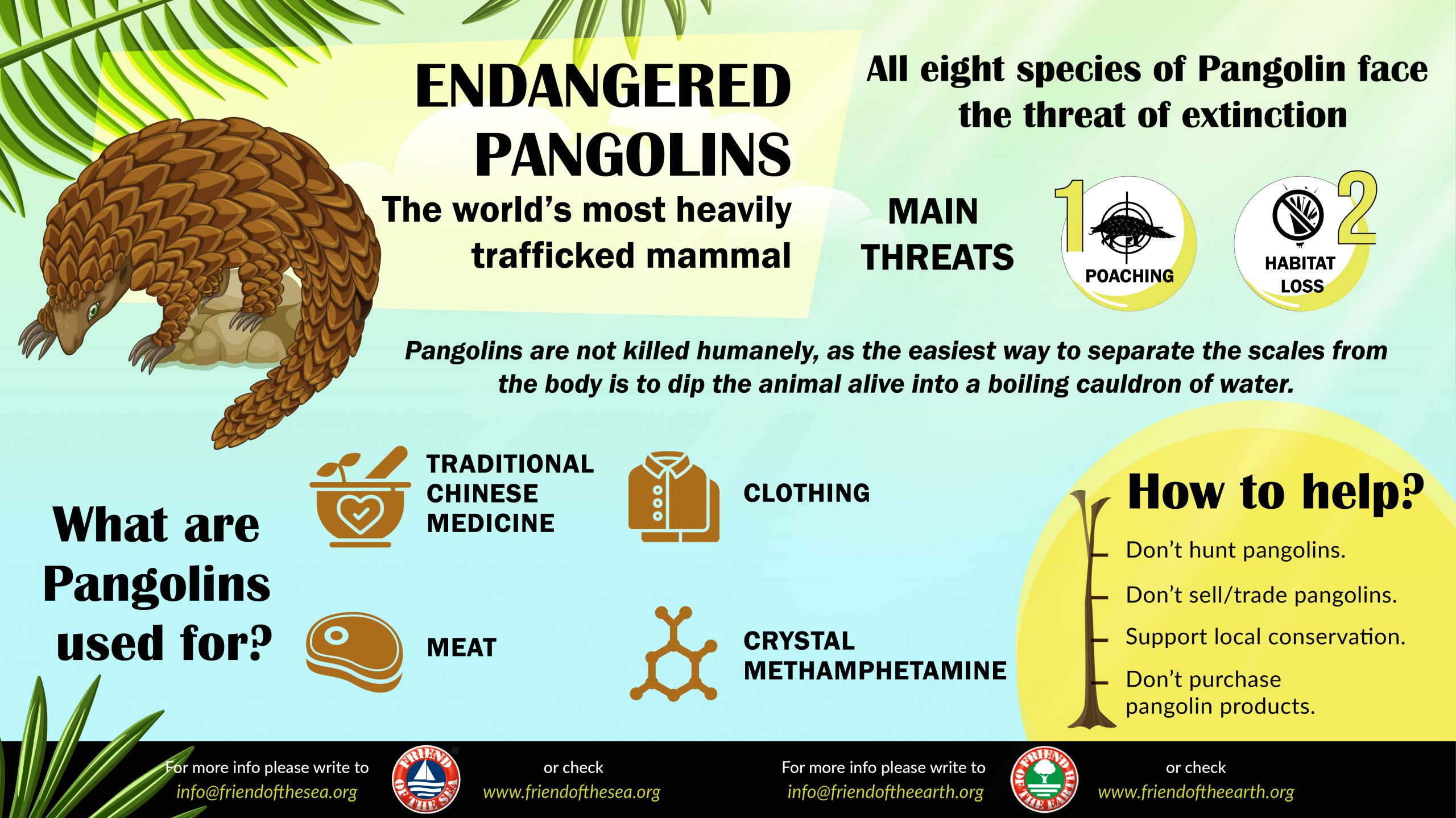 In recent years, pangolins have become a symbol of conservation. These unique, characterful animals have grown famous globally for their unusual looks and worthy plea; more resources and attention are being devoted to their conservation.

Conservation organizations are working to improve our understanding of the pangolin’s ecology and behavior. Pangolins are elusive mammals that wander their habitats alone, mostly at night. They have proven difficult to study but renewed efforts are underway to identify the distribution and ranges of pangolin populations, as well as how their ecosystems can be manipulated to ensure their survival in the wild. Surveys are underway to work out how many pangolins there are in the wild.

Elsewhere, educational initiatives are raising awareness about pangolin conservation amongst local communities and rangers are being trained to help crack down on poaching in high-risk areas. Though the main aim is to stop pangolins from being taken from the wild in the first place, it is also important that rescue centers are given the training and resources necessary to rehabilitate live pangolins that have been seized from illegal traders.

WSO, by means of its Friend of the Earth project, is raising awareness about the pangolin’s story, which is not well known on a global scale. Many people still don’t know what a pangolin is or why the animals are threatened. Sharing the pangolin’s story will help in the development of a global community standing in unity against the illegal poaching of pangolins for meat and traditional Chinese medicine.

Please have a look at our webinar “Special Earth Day webinar about Pangolins & Covid-19” With Patrick Boehler editor of the pangolin reports.

Friend of the Earth also petitioned China to stop trade in Pangolins and Dr Bray has been interviewed on the subject on BBC World Service Radio and Radio 4, Business Matters (min 18).

We are also planning to assist and fund pangolin rehabilitation centers and studies of the pangolins’ biology, ecology and behavior that help to inform the upbringing of pangolins in captivity as well as their conservation in the wild.

Help to halt the dramatic decline of these unique mammals by sharing their story.

Use social media to tell the world that it is not OK to consume pangolin meat – these animals need our help.

Make a donation to support pangolins and raise awareness.