Save the Ibis
Campaign

Human activities such as urbanization, industrialization, usage of toxic pesticides and herbicides, mining, and recreational activities are forcing many of these species to shift their long-adapted habitats as they look to new places for food and propagation. Further threats come from invasive or problematic native species and various pests and pathogens. 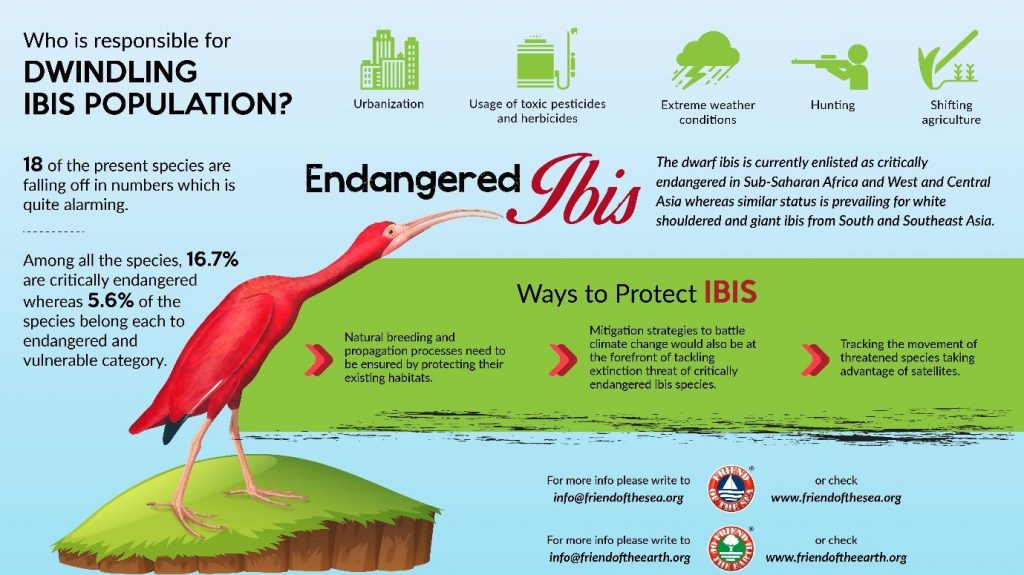 The latest IUCN data shows that 15 species of Ibis are dwindling in numbers. The Sub-Saharan African region tops among all regions, being the home of seven of these species. Likewise, Southeast Asia homes six species whereas there are four from South America and three from West and Central Asia. Major areas of concern are countries like Cameroon, Congo, Ivory Coast, Ghana, Liberia, Madagascar, Sierra Leone, Vietnam, Thailand, Myanmar, and Cambodia each of which harbor four of the endangered species.

Among all the species, 10% are critically endangered, 10% are endangered and 3.3% vulnerable. The dwarf ibis is currently enlisted as critically endangered in Sub-Saharan Africa and West and Central Asia whereas similar status is prevailing for white shouldered and giant ibis from South and Southeast Asia. Unfortunately, the Jamaican ibis or clubbed wing ibis have already been pushed to extinction.

Several steps need to be taken to conserve the critically endangered and endangered ibis species. Natural breeding and propagation processes need to be ensured by protecting their existing habitats. To achieve that, strategies of industrialization, farming and urbanization should be adjusted appropriately, i.e., not undermining the habitats of these birds. Besides, habitat restoration activities such as effective management of national parks, wildlife sanctuaries, protected in-land water bodies are crucial and such places need to be established in countries where such facilities are not available yet. A point to mention here is that the situation of the northern bald species of ibis is showing substantial improving due to actions of conservationists in the Souss-Massa National Park, Morocco.

Ex-situ conservation practices such as captive breeding and artificial propagation could increase their numbers. Once success is achieved in this process, then these species could be reintroduced to their original habitats or new habitats. The crested ibis lately made a comeback to South Korea 40 years after becoming extinct due to successful captive breeding programs. Nowadays, tracking the movement of threatened species by taking advantage of satellites is possible and this should be done for ibis as well. They should also design experiments to understand the breeding practice of these birds and to find a solution against various alien species and pathogenic diseases.

WSO has taken the following steps as part of its ongoing activity towards certifying products generated from sustainable aquaculture and agriculture: