Save the Big Cats

Save the Big Cats
Campaign

There are seven main groups of big cat: lions, leopards, jaguars, snow leopards, tigers, cheetahs and cougars. They live in countries stretching the globe, from Russia, through Africa to South America, and are all facing serious threats.

It can be difficult to picture a world where big cats and humans live alongside one another in harmony.Big cats have a reputation for being dangerous and conflict with humans is a considerable issue facing big cat conservation. The other main issues are habitat loss and degradation.

Hunting for illegal trade it another issue facing big cat species. Tigers, leopards and snow leopards in particular are commonly killed and their parts sold for the traditional Chinese medicine market. The demand for big cat products in health supplements is high in some parts of Asia. They are also hunted for their fur, which is used to make clothing and other fashion items. 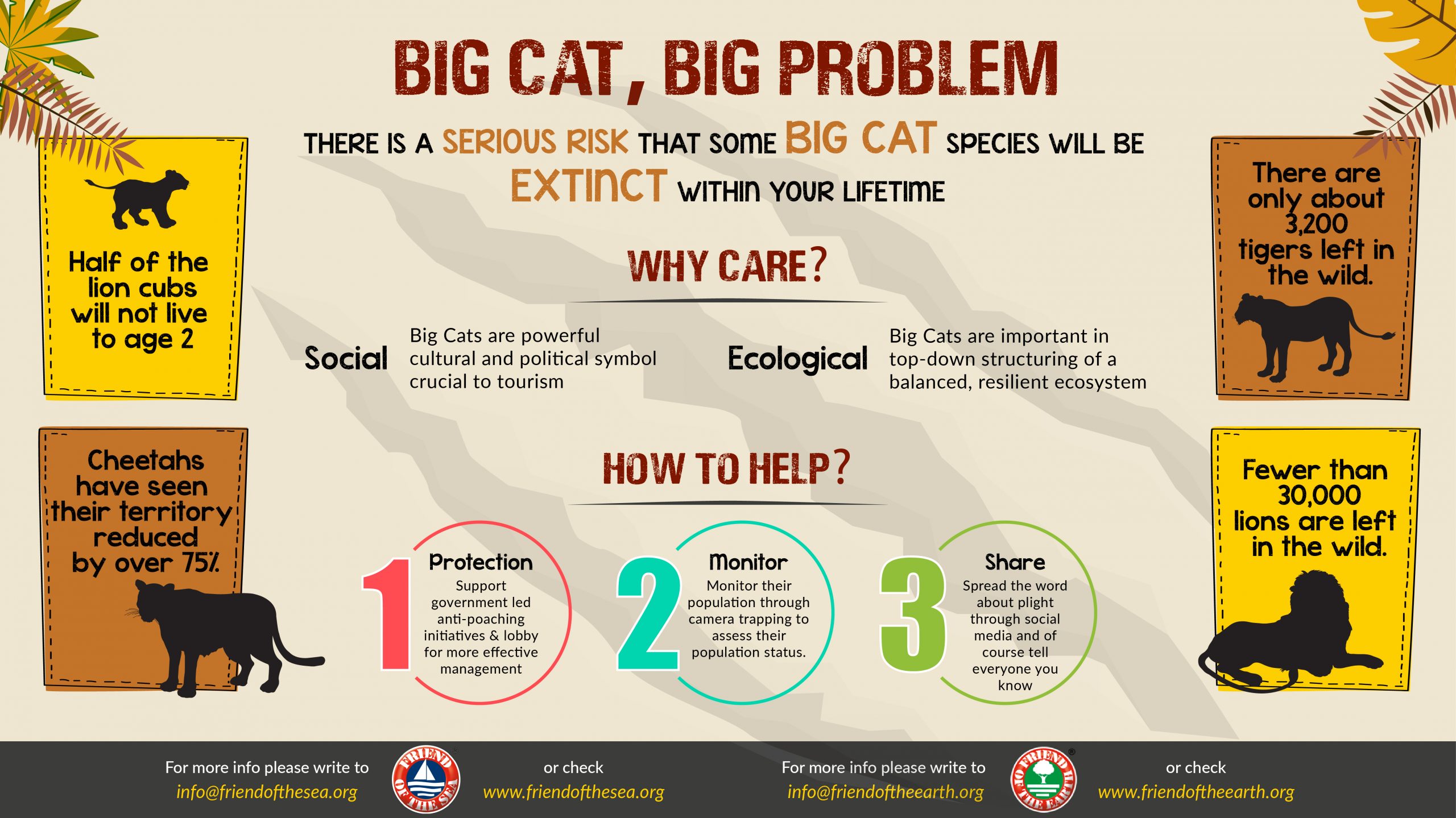 All big cats play a vital role in maintaining ecosystem function. If any of the big cat species were to go extinct, the ecosystem would undoubtedly shift, likely with negative consequences for the diversity and abundance of other species.

To reduce hunting of wild cats, big cats are often kept in protected areas and monitored by rangers. Resources are used to train rangers, fund equipment and develop intelligence networks to help target the right areas.

To reduce the number of big cats killed by humans who feel their livestock is under threat, prey populations should be protected. Where big cats are living in unprotected areas, conservationists must monitor legal hunting of the prey species; ensuring the big cats have plenty of natural prey might reduce attacks on livestock.

In areas where conflict between humans and big cats has become a serious issue, it may be possible to relocate either the humans or the big cats. It might also be possible to educate communities living near big cat habitat on behaviours that could help to avoid conflict situations.

WSO Friend of the Earth project raises awareness about the issues facing big cats, including population declines due to illegal hunting for parts of big cats that are used in traditional medicine.

Friend of the Earth has launched a campaign to lead major producers of tiger parts products to stop producing those products. These ingredients have no proven health benefits and if the demand can be quashed, the hunting pressure on these animals will ease.