SAVE THE BATS
Campaign

Bats are mammals with their forelimbs uniquely adapted as wings, they are the only mammals capable of true and sustained flight. Bats are even more mobilethan most birds, flying with their long spread-out fingers covered with a thin membrane.

They are one of the most important groups of mammals in terms of ecosystem functionality. This is particularly important under the harsh impacts the world is witnessing under widespread deforestation and habitat disturbance. Bats are often the best means of dispersing seeds and increasing the rate of recovery in these situations.

The International Union for Conservation of Nature (IUCN) has assessed 1332 species of bats. Information on bat populations is often cumbersome to collect, thereby proving very difficult to identify changes in population size and dynamics.

In many parts of the world, bats are considered labelled pests or carry stigmas in harmful myths and can be mistreated. Larger bats may also be hunted for their meat, which is consumed in some parts of the world.  Habitat loss is a major threat to bat species globally. Deforestation for farming, mining, and other human interference is having a significant impact on many bat populations since they depend on trees and caves to roost in. The homes of these species are also threatened, thanks to inappropriate tourism and the mining of bat droppings, which are used as fertilizer.

An unpleasant fungal disease called white-nose syndrome threatens bat populations in the US and Canada. Bat populations are also threatened by the rise in wind turbines, which cause many bat deaths as the mammals fly into the blades. Cats (both domestic and feral) pose a further threat to bats. They are renowned for predating on bats and are known to wait outside a roosting site and pick off bats one by one as they fly out to feed. 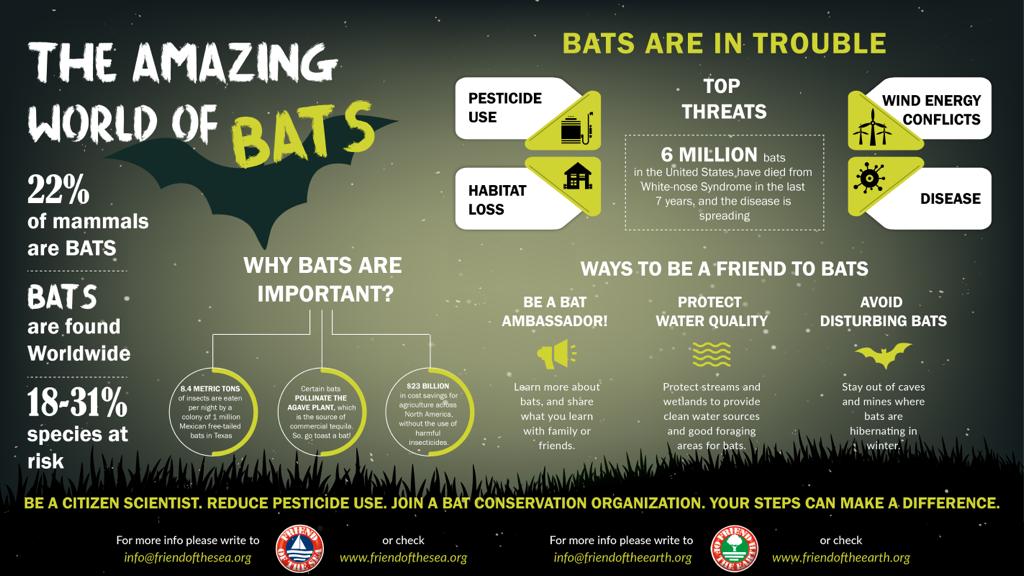 Nearly one-third of bats are listed as threatened. 23 bat species as critically endangered, meaning they face an imminent risk of extinction, having fewer than 250 adults remaining. 84 other bat species are endangered,  while another 110 species are considered vulnerable.

The “most endangered”  species is estimated to be the Lamotte’s Roundleaf Bat. Six individuals were known in 2004, living in caves on Nimba mountain, threatened both by hunters looking for bats to eat and miners looking for iron ore.

If a population suffers a crash, for example, due to a cull or natural disaster, it can take a long time to recover, which can prove problematic given bats have a low reproduction rate, with each female typically having one pup per year.

Bats have an important environmental role,  representing a vital element maintaining ecosystems all over the world. They are key to seed dispersal and pollination and, particularly in some parts of the world – such as tropical and desert ecosystems – are vital to maintaining the abundance and diversity of plants necessary for a healthy ecosystem. Many plants are reliant exclusively on pollination by bats for survival.

Fruit-eating bats are important for local economies; without them, fruits could not be produced in such quantities. Where areas of rainforest have been damaged, no other groups of animals are as efficient at restoring the habitat as bats. They are particularly important for dispersing pioneer plant species – those that form the first layer of vegetation in cleared areas. Bats defecate when they are flying and their droppings also provide excellent fertilizer for plants.

Insectivorous bats also hold important roles in ecosystems. They consume huge quantities of insects and keep the numbers down, helping reduce the impact of insect pests on agriculture. It is thought that in the US, bats save upwards of $3.7 billion per year in crop damage and pesticide use.

Bats are found all over the world. Their functions are clear and the extinction of bat species can have significant, irreversible impacts on ecosystems globally.

Given the long list of threats bats face, conservation initiatives are imperative to reverse and rebuild damaged populations. Organizations all over the world are working to protect groups of bat species in different regions; the effectiveness of conservation will vary depending on the region and the severity of threats faced.

The reversal of habitat loss is key to saving bats. Bat surveys should be undertaken before altering an area of forest or caves, and this should be implemented around the world on a local scale. Initiatives are also underway to reduce harmful tourism activities in bat caves and encourage the use of bat boxes in forests and gardens.

Unfortunately, a solution has yet to be found to combat white-nose syndrome, so resources here are being targeted at monitoring and scientific research into the disease and its spread. To prevent fatalities caused by wind turbines, conservation organizations are campaigning to change policy and regulation to minimize the impact of these farms on bats. Various new technologies have been developed to prevent bats from flying into turbines, such as ultrasound deterrents.

Elsewhere, there are campaigns to change the behaviors of cat owners. Keeping cats inside at dawn and dusk can have a significant positive impact on bat populations. There are also methods to reduce outdoor cats’ predation impact on bats, such as attaching bells to collars.

The bat conservation campaign will focus on the 23 most endangered species, collecting signatures via a Change.org petition and informing local governments about the problem to critical awareness revolving the issue.

Friend of the Earth also selects successful conservation projects to be supported and funded and it will report on this page on major achievements.  Funds will be directed to specific projects aiming to protect and restore bat habitats and hot spots, and research methods to tackle white-nose syndrome.