Save Vietnam’s Wildlife and Friend of the Earth have joined forces to protect pangolins and put an end to wildlife trafficking. 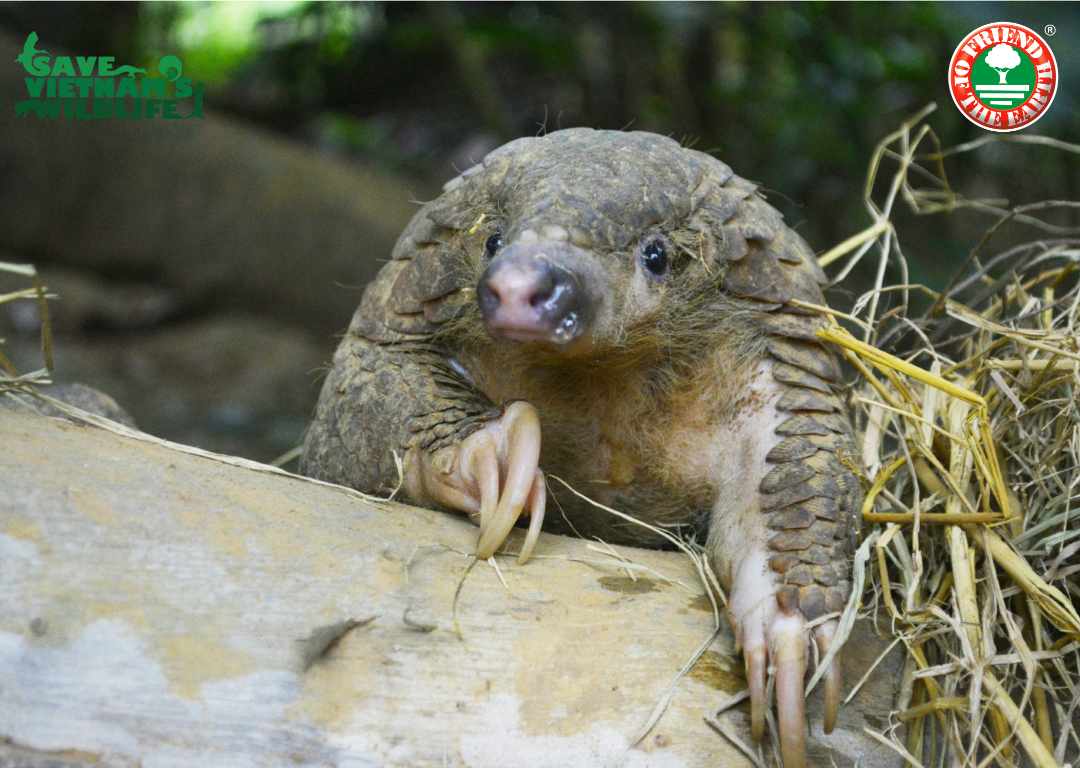 Together, Friend of the Earth and Save Vietnam’s Wildlife will support pangolins and put a stop to wildlife trafficking.

Friend of the Earth is launching a new partnership to support Save Vietnam’s Wildlife, which works to rescue, rehabilitate, and safeguard the habitat of other endangered species as well as the pangolin, the world’s most trafficked mammal. Wildlife trafficking is a significant component in the spread of zoonotic illnesses, in addition to the vital biodiversity, animal cruelty, and environmental variables.

Pangolins, which were previously largely unknown in the west, gained widespread notoriety in 2020 as a result of the covid pandemic. People learned about the devastating effects of interacting with wildlife, ruining their habitat, and illegally trafficking species as they suspected that possible causes of the sickness included human-pangolin contact.

Pangolins, also known as scale-covered anteaters, are remarkable and critically endangered animals. Asia and Africa are home to the world’s eight pangolin species. They have long been trafficked in Chinese culture due to the alleged medicinal properties found in their scales. With the trade for their meat, which is considered a delicacy in some parts of the world, and habitat destruction, all eight of these species are now on the IUCN red list and facing extinction.

As a result, this year, Friend of the Earth and Save Vietnam’s Wildlife (SVW) have joined forces to focus more funds on saving pangolins. As part of its efforts to protect endangered species and ecosystems, the World Sustainability Organization’s Friend of the Earth international certification program will contribute with special funds to support the care of pangolins in SVW’s rehabilitation centers.

Pangolins are fascinating and one-of-a-kind creatures. They are also beneficial to the environment. Pangolins play an important role in insect control in the forest. Without them, the delicate balance of ecosystems will be thrown off. Here are some interesting facts:

The word pangolin means “roller.” It is derived from the Malay word penggalung, which describes pangolins’ actions when they are scared: they roll up into a ball, exposing their scales to the potential predator. Unfortunately, this trait makes them more vulnerable to human capture.

Pangolin tongues can reach lengths of up to 40cm. Their tongues are used to catch an estimated 70 million insects per year!

Unfortunately, these and other distinguishing characteristics are some of the reasons that Pangolins are so popular. According to the non-profit Pangolin Specialist Group, one pangolin is taken from the wild every five minutes for illegal trade. Despite an international trade ban that took effect in 2017,

In recent years Vietnam has become not only the supplier, but also the receiver of trafficked pangolin scales. SVW therefore works to raise awareness of the dangers from both ends of the market. This change emphasizes the importance of Save Vietnam’s Wildlife’s work in conserving remaining animals and raising awareness about the use of their products.

Friend of the Earth + Save Vietnam’s Wildlife

Since 2019, when a change.org petition successfully contributed to a trade ban in China and Vietnam, Friends of the Earth has been interested in protecting pangolins. As a result, in 2022, the sustainability program has decided to go one step further in contributing to pangolin conservation efforts by partnering with SVW.

Since 2014, Save Vietnam’s Wildlife has been working to protect pangolins, otters, leopards, and other endangered Vietnamese species from illegal trade. They take a multifaceted approach that includes habitat protection, advocacy, rescue and rehabilitation, education outreach, conservation research, and breeding.

Working in high-risk areas for animals, their rescue efforts have resulted in the saving of 2,125 animals over the last eight years, with 60% of those released.

In 2018, they formed Vietnam’s first anti-poaching team. They have so far caught and removed 12,868 traps and 710 human violations.

Friend of the Earth’s special funds will assist SVW in carrying out its various activities addressing the root causes of wildlife trafficking. Save Vietnam’s Wildlife has created advocacy and education programs in which they host awareness programs in schools, give citizens the opportunity to solve conservation challenges, and engage in a variety of other important activities.

Friend of the Earth: Environment and Sustainability

The important work of organizations like SVW in conservation and education must be supported if these remarkable animals are to be saved. This collaboration complements Friend of the Earth’s other important awareness campaigns involving local populations to protect endangered species and habitats.