More space for orphaned baby rhinos! Friend of the Earth and The Rhino Orphanage team up to expand habitat land 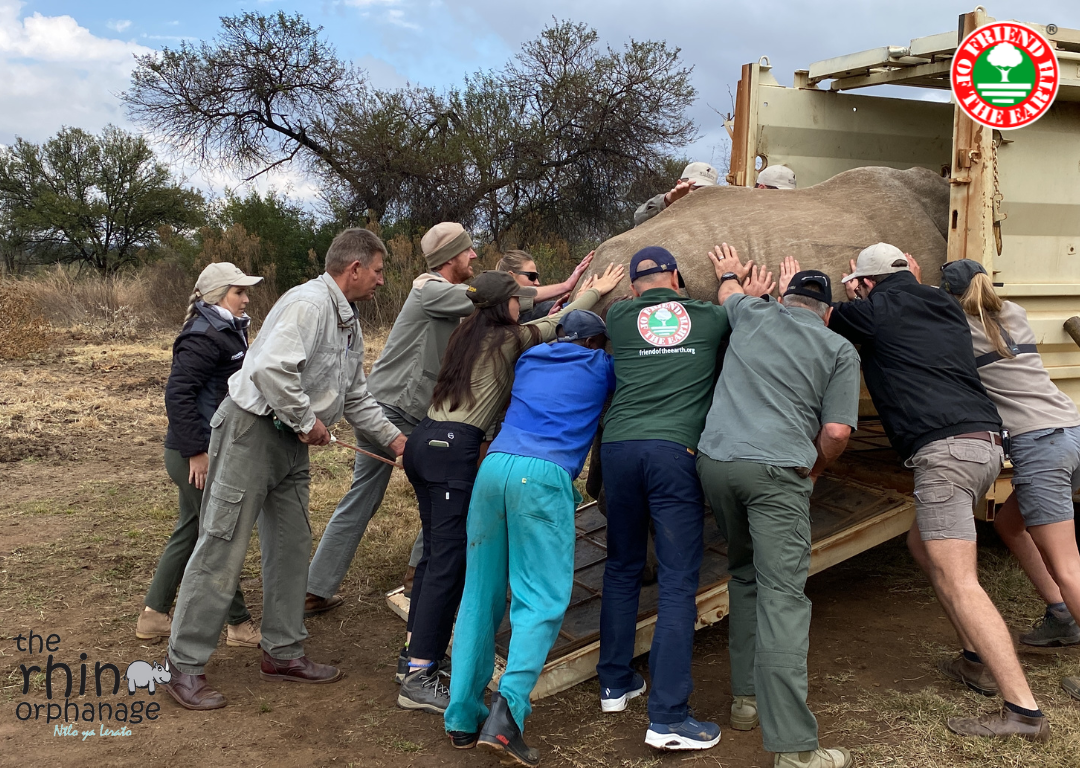 Of the five species of rhinos alive today, the critically endangered black rhino and the near threatened white rhino both live in South Africa. Friend of the Earth has teamed up with The Rhino Orphanage, a rescue and rehabilitation center for orphaned rhinos, to support the orphanage’s plans to expand the land dedicated to rehabilitation

In 2012, Arrie van Deventer received a call from a frantic neighbor – two mother rhinos and one calf had been killed on his property in the Limpopo province of South Africa, and the remaining calf was running around, terrified.  They corralled the calf, and then Arrie started making calls.  What happened to orphaned rhinos when their mothers were killed? Finding out that there was no support for them, he decided to create it himself. Ten years later, The Rhino Orphanage (TRO), has expanded to a team of 8 specialists, who care for around 30 rhinos at a time.

After Friend of the Earth (FOE) Director Paolo Bray’s trip to visit the orphanage in South Africa this past June, FOE is officially initiating a collaboration to fund TRO’s new project of expanding baby rhino’s land from the current 80 hectares farm to a 4800 hectares farm. This project will allow 60 times the current amount of space for rhinos to transition into the wild, which will have a huge positive impact on their rehabilitation. The collaboration coincides with World Rhino Day, taking place on September 22nd, which gives us an opportunity to learn more about this unique and threatened species and what this remarkable organization is doing to ensure their survival.

TRO’s efforts have a three pronged approach:  1. rescue, 2. raise, and 3. rehabilitate.  Rhino calves and mothers are closely bonded, and babies are fiercely protected by mothers in the wild. This makes orphaned babies particularly vulnerable, and the work of TRO very time intensive in the beginning stages as they are replacing the mother’s nurturing.  Specialists then care for all their needs as orphaned babies: feeding, veterinary care, and enrichment objects to improve psycho-physical and social skills.  After 4-5 years, they are ready for release back into the wild.

TRO takes care of both black and white rhinos, which unfortunately, are legally allowed to be poached. Though there is now a quota of ten legal trophy hunts of black rhinos, illegal poaching brings that number much higher. Currently 2 rhinos are killed per day around the world for their horns, which are prized for use in Traditional Chinese medicine and also as status symbols. This leaves hundreds of orphaned babies.

Rhinos are also in danger due to habitat loss.  With the human population of their homelands increasing rapidly, their natural habitat is shrinking and they are more and more dependent on nature reserves to survive.  This makes TRO’s project of increasing land use to baby rhinos even more crucial.

Hope for the future

Despite all of these challenges, in some places rhinos have started to make a comeback. The best example is the Indian rhino which has rebounded from 100 to 3,700 animals since the early 19th century. Both black and white rhinos in South Africa are tentatively following suit, thanks to programs such as those of TRO.  Unfortunately, illegal poaching is increasing at the same time, and it is unsure if these species will be able to continue this positive trend. Mario Passoni, FOE’s Head of Conservation Projects condemns poaching, saying: “Rhinos are fundamental for the African savannah. Killing them to sell their horn is a deplorable activity that must stop as soon as possible. For this reason, we at Friend of the Earth are working hard to ensure that these mammals do not go extinct.”

Friend of the Earth + TRO

The crucial work of TRO and other organizations towards conservation and habitat expansion must be supported if the hope for a rebound that some rhinos are showing now is to be kept up. As TRO’s founder, Arrie van Deventer pleads: “Please care. We cannot lose an iconic species – Not on our watch!” To support this project, visit Friend of the Earth to learn more about rhinos and our other important awareness campaigns to protect endangered species and habitats.